Getting Skype working again on a Power PC Mac

I have not blogged for over a year but discovered something yesterday from a YouTube video that helped me get Skype working on my G3 iBook Clamshell and my old Power Pc iMac.

If you still have a Power Mac you will know that first Skype stopped the capability to video call using Skype and have recently retired it all together on Power PC Macs.

I found this out the hard way. I usually Skype my friend in Canada on my Intel Mac which is set up in my living room. I have an old Power PC iMac upstairs in the spare room which I can transfer to if my wife is watching TV and my conversation on Skype is disturbing her viewing.

Earlier this year I was surprised to find that video calls on my Power Mac was no longer possible when using Skype. This wasn't too much of a problem because the video is not essential during a call.

Last night when I swapped to the Power Mac, halfway through a video call on my Intel iMac, I launched Skype and a message came up  saying that Skype couldn't connect to the server. I looked into this on Google and found out that Skype had been retired for power PC Macs. This was going to cause me problems so I went on YouTube to get some advice to see if this problem had a fix. Within five minutes I had found an easy to follow video that helped me get Skype working, not only on my Power PC iMac but also on my ibook Clamshell G3.

Below is the link to this video on Youtube
https://www.youtube.com/watch?v=d5Pmf0wxUe8

Below are the steps that are explained in the video.

1. The simple trick is to click on the Skype application in your application folder while holding down the control key. This will open a pop up menu.

3. A folder will open with a folder called contents in it.

5. Inside double click on info.plist. to open it (If it doesn't open but gives you the option what to open it with choose text edit or something similar)

6. Once this file is open scroll down the list of text. Scroll through this text to find and replace three sets of numbers which relate to the version number of Skype you are using, probably 2.8.0.866 or an earlier version number if you are using a G3 Mac. To help you find these, the word 'string' appears at the start of these lines with the numbers.

8. Once the three numbers have been replaced, quit and relaunch Skype. It will launch as if it has been launched for the first time. Accept terms and conditions and then sign in. Skype will now launch and connect to the sever because the  server is tricked into thinking that you are using a supported version of Skype and thus must be using a supported Intel Mac.

Once you get Skype working (speech only, video not supported) you will feel so good that you have tricked the server and are back using Skype on yourPower PC.

Good luck and thanks to Channel48 for posting the video on Youtube. 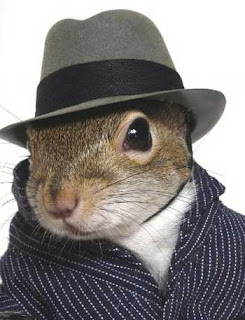 I was out on my lunch break yesterday and had just bought some dried apricots to snack on, after an amazing spaghetti bolognese at Harpers cafe. Having a wander I spotted a squirrel down Chapel Court, on top of one of the industrial bins, used by the Blue Eyed Maid pub. Being an empathetic human I thought I would share my bounty of fruit with the squirrel, who was checking out the bins for a pub lunch. I stood there next to this bin, with my arm stretched out, offering the squirrel a tasty, non-refuse snack. It was a bit timid at first, but became quickly interested. He was just about to take the offering, when some people walked into Chapel Court from Borough High Street. Instantly the squirrel ran for cover behind a window box and was now out of sight from the passers by. This left me standing by a half open industrial bin, holding a dried apricot at arms length to a window box, making little kissy-kissy, squeeking, encouragement noises.

I could have instantly have snapped back into normal pedestrian mode, but that would have looked even more suspicious than it already did. I hope the people who witnessed this event thought I was an interesting London eccentric or were aware of the growing urban squirrel problem of Chapel Court.
Posted by Drimblewedge at 2/22/2013 12:18:00 PM No comments:

Anyone out there who has discovered Farsight Studios, Pinball Arcade, know what a great Pinball hub it is. The tables are simulated very well and are all real tables that you used to find in amusement arcades from Soho down to Brighton. As a teenager I must have played them all!!!! At the time I knew the fundamental rules of each table. The little card on the front gave you a brief synopsis of the rules and what you had to do to rack up a high score and add your initials to the hall of fame. You soon learned that you could change the lane lights with the left and right flippers to notch up the end of ball bonus multiplier.

When I first downloaded the Pinball Arcade application, I was very impressed. The tables were at pocket money prices. Once you have bought the main application, which comes with four good tables, for just £6.99, following releases come as packs of two for just £2.99. You could spend that amount in under half an hour playing the real tables. Apart from the excellent price these tables play and sound as good as the real thing. New table packs are released every six to eight weeks.

These instructions can be found only when you have actually started a game.

1. Chose the table you want to play by pushing the start button.

2. Press the table menu button and scroll down to the Standard Goals or Wizard Goals and select this option

3. Now press the View Instructions button. Here you will find an extensive set of  instructions.

These instructions will vastly improve your enjoyment of the tables even more than when you played them in the amusement arcade. Back then you may have had crazy flipper fingers and never tilted at all, but in a sense you were playing deaf, dumb and blind, without the full knowledge of the instructions.

I have also found that Pinball Arcade's support team are very helpful. If you email them they get back to you to resolve any problems within 24 hours. Email them at support@pinballarcade.

One other thing I have noticed is that when a table is released on Pinball Arcade the real tables start appearing on ebay. You now don't need to take up all that space in your home to play your favourite tables from the past.

Not forgetting that these tables are only simulations, there is nothing quite like playing the real thing. About 15 years ago you could still find many pinball tables operating in pubs and amusement arcades. Not any more though. They have disappeared at an alarming rate. There is hope though. A pinball enthusiast has set up the 'Pinball Parlour', a working museum of pinball tables on the Kent coast in Ramsgate. Now you can experience the pleasure of playing real pinball tables from the sixties onwards with the smell of the sea and fish and chips in the air. www.pinballparlour.co.uk.

If you used to play them in the past or have never played a real pinball machine........ What are you waiting for?

STOP PRESS (Champion Pub and Pin Bot)
The latest update for Mac seems to have added the ability to start games and toggle between scrolling and non scrolling mode, during game play. The space key now acts like an enter key which saves you having to use the mouse to start every new game or click through settings. 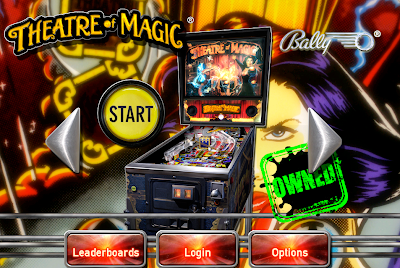 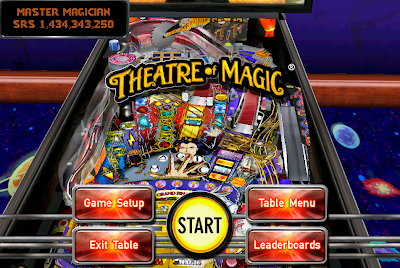 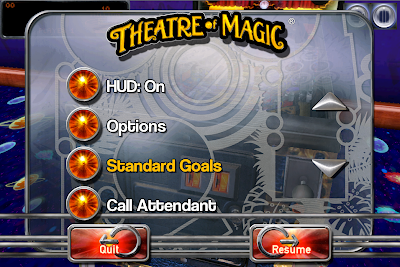 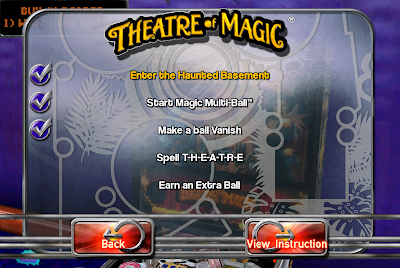 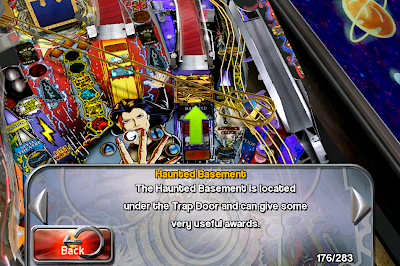 My wife and I took the train from Dartford to London Bridge to check out the Queen's Diamond Jubilee Flotilla. Before we left we checked the web to see where we could stand and watch it all. When we got to London Bridge we walked down Tooley Street hoping to get to the riverside to get a view of the event. All the way down to Tower Bridge all the access to the river was blocked off by police and security. We were told we could watch the event on the video screens but would not be allowed access to the river. Many people were complaining that they had traveled miles to be there with their kids to see the event. We about-turned and managed to get a place to stand on London Bridge. On the bridge the public were guided between metal barriers in the road where it was almost impossible to see anything. I am over six feet tall so I could see the river and a few boats but my wife many other people struggled to see anything at all. The press were on the other side of the barriers and we managed to find a spot behind one of the television cameras where we finally had a fairly good view. The rain got worse and worse and as soon as the boats started to dwindle people started to disperse. On the way back to London Bridge station I saw this mask lying in the road all soggy and trampled and took a picture of it. I think it sums up our day more than any of the pictures I tried to take of the actual event. Eat your heart out Jamie Reid......God save the Queen! 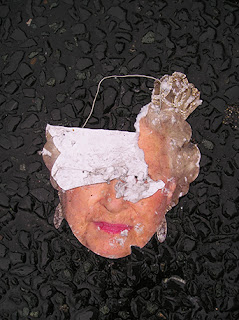 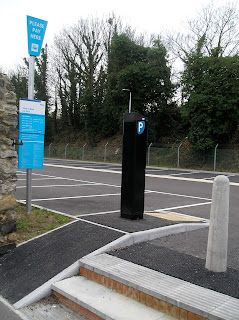 Yes it's back. The ticket machine blocking the wheelchair access to the car park in Victoria Road Dartford was removed at the end of last year but has now been reintroduced.

I thought my blog may have had an effect when the machine was removed soon after my original post. I now believe that the first machine must have been stolen. Maybe it is the new TARDIS.

I have noticed that not a single car is pictured in my posts of this car park. Either everyone in town has read this blog and are boycotting it or it is not a popular place to park your car. The cost of a days parking has recently been lowered from £6 a day to £4 a day. 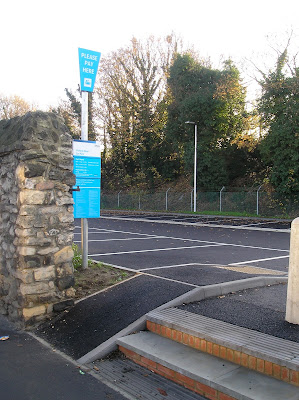 I thought it only fair to do an update on the Victoria Road car park, wheelchair access blockage. I am pleased to report that the pay here machine has now been moved and is no longer blocking wheelchair access at the top of the drastically steep slope. At least now when you finally get to the top of the slope you wait for the beads of sweat on your brow to evaporate before moving uninhibited into the car park. The exit is still as scary though as you roll at speed down the slope towards a very busy main road. Another exit is available right down the other end of the car park if you don't fancy your chances here.
I hope in some way my blog had something to do with alerting someone to rectify this unacceptable situation.
Previous post about this access.
http://bloggedubdoze.blogspot.com/2011/09/wheelchair-access-white-knuckle-thrill.html
Posted by Drimblewedge at 11/19/2011 07:41:00 PM No comments:

One step closer to old age 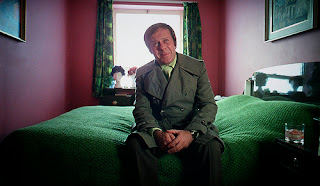 I had a tooth pulled yesterday which has left a huge gap. It was a tooth that has been filled again and again because the filling kept falling out. There was about 40% tooth and 60% filling so it had to go as they could not continue to fill it.